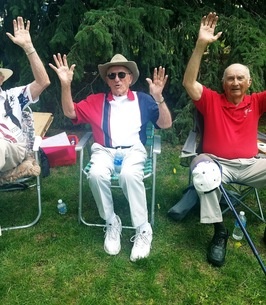 Robert “Bob” “Ruff” Lind was called to heaven Tuesday, July 13, 2021. He was born December 5, 1930 in Windsor, Colorado to Jacob and Katherine E. (Stroll) Lind. He was number ten of fourteen children.

During his high school years, Robert's athletic abilities were demonstrated by playing football, basketball and running track. He graduated from Windsor High School in 1949 and continued his love for competitive sports by playing fast pitch softball for over 20 years.

Robert married his high school classmate, Ruby D. Haas on June 1, 1952 at Zion Lutheran Church, where he was also baptized and confirmed. They raised four daughters, Cathy, Doris, Barbara and Andrea. He worked for Erbes Brothers Carpentry for a few years and then began his thirty-three year career at Home Light & Power/Public Service. In his spare time during his career and after retirement, he remodeled, flipped and built over twenty-two homes. He also worked part-time at the Cloverleaf Dog Track as an usher.
On April 16, 1986 Robert married Donna Schafer. They enjoyed volunteering at the Recreation Center, traveling with friends and visiting family in Wisconsin.

Robert's children, grandchildren and great grandchildren were the joys of his life. He loved watching them participate in their sports and activities. Many fond memories and storytelling with friends and family members were shared on his front porch. A bus ride to Blackhawk was always on his calendar.
His surviving relatives who will miss him dearly are his three daughters Cathy Broida, Bobbie (Tom) Wochenske, Andrea (Kirk) Starck, four grandchildren, Leah (Mike) Miller, Tyler and Jordan Wochenske, Dillon Starck, two great grandchildren Danielle and Brianna Miller, two brothers, Elmer and Bill.

Memorial service will be held Friday, August 13, 2021 at 11:00 a.m. at the Faith Church of Windsor. In lieu of flowers, memorial contributions may be made to Faith Church of Windsor or Pathways Hospice of Fort Collins in care of Marks Funeral & Cremation Service, 9293 Eastman Park Drive, Windsor, Colorado. 80550.

Online condolences may be made at www.marksfuneralservice.com.
To order memorial trees or send flowers to the family in memory of Bob Lind, please visit our flower store.