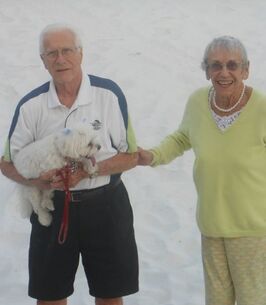 Rich Schaller, 94, passed away peacefully at Grace Pointe Senior Care in Greeley, CO on November 22, 2019. He is now reunited with his loving wife of 67 years, Jeanne Higgins Schaller and his parents Alois and Stella Schaller.

He was born November 7, 1925 in St. Louis, MO and was raised with his sister Catherine Gravlin of St. Louis. His childhood was enriched with playing baseball, fishing with his father, playing violin and visiting his uncle’s rural parish.

He attended Marist High School and, while a counselor at Camp Don Bosco, he met his soul mate, Jeanne Higgins. The Air Force and WW II postponed their courtship for a few years. Rich returned stateside, completed his degree at St. Louis University and they married in June 1949.

Jeanne and Rich filled their free time with home improvement projects, entertaining friends, playing bridge, camping in the Canadian wilderness and on US coastal beaches. On one of these camping trips they discovered the ‘sugar white’ beaches of the Florida Panhandle. It was in Destin FL that they retired after 25 years as an FBI agent and 20 years as a NY State Special Prosecutor.

It was sad to give up the year-round golf games, but in 2014 Jeanne and Rich moved to Windsor, CO to be near the family. They were warmly welcomed by the community at Good Samaritan Water Valley and by the congregation at Our Lady of the Valley Catholic Church in Windsor. They lived together there until Jeanne’s death in 2017. Rich then moved to Grace Pointe Senior Community which was his home until he died.

Rich was a devoted husband, a loving and energetic father, a loyal public servant and a devout Catholic. His quiet strength, tenacity and perseverance were our anchor in life. Rich showed humility in all things, never disparaging another and always showing tolerance, openness and acceptance. His faith was a deep and personal spirituality that never sought to be recognized by others. Instead he lived his faith by generously caring for the less fortunate. Each and every one of us knows what Rich left in our hearts and how he helped us to be our best selves.

Rich will be sorely missed and remembered as a loving brother to Catherine Gravlin of St. Louis MO.
As a loving father to Kay Steg (Jeff) of Ault CO, Mary Jeanne DeMarie (Mark) of Denver CO and Mike Schaller (Kim) of Lee’s Summit MO.
As a loving grandfather to Colleen Underwood (Erick) of Paris France, Allie Steg Haskett (Chris) of Greeley, Matt DeMarie (Helena) of Denver, Drew DeMarie (Nicki) of Denver, Molly DeMarie (Tom Westover) of Portland OR, Erin Jorgenson (Brent) of Lee’s Summit, MO, Kate Wendt (Austin) of Spokane, WA,
As “GG-Pa” to 12 great grandchildren in Colorado, Missouri and Paris France.
And as an uncle to four nieces and nephews in St. Louis MO.

In lieu of flowers, if you wish to make a memorial donation to your favorite charity in Rich’s name, please do so. We’d love to hear about the causes you support
To order memorial trees or send flowers to the family in memory of Richard Frederick Schaller, please visit our flower store.