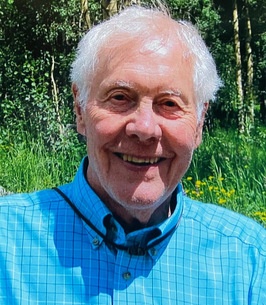 This week we said farewell to a man who lived an exceptional ninety years. Richard Griffith was a Pilot, Skier, Air Force Veteran, Rotarian, Community Volunteer, Master Gardener, Mechanical Engineer, Lionel Train Engineer, Volunteer Storyteller to first graders, Backpacker, Baker, and beloved Brother, Husband, Uncle, Father, and Grandpapa.
This was just some of what he did, but more remarkable was who he was. Dick was indefatigably demanding of himself and beyond generous to others. An eternal optimist, he was also insatiably curious about all things, from western water rights to the reintroduction of wolves to Yellowstone - and especially the favorite school subjects of his grandchildren.
Richard, Dad, Uncle Dick and Grandpapa was also exceptional for defying every speed limit behind the wheel of a car. It’s no wonder he needed to fly! The cockpit was his haven and his heaven.
Dick is survived by his loving family; His wife Marlene, his sister Jenny Wisniewski, his children Tracy Griffith Egan (Robert) Scott Griffith (Pia) and Alan Zillich (Colleen). He was especially adored by his grandchildren (Fiona, Marisa, Lucy, Maia, Oliver and Graham).
A private memorial will be held at a later date. In lieu of flowers please consider donating to The Fort Collins Breakfast Rotary Charitable Foundation PO Box 272728 Fort Collins, CO 80527.

“Oh! I have slipped the surly bonds of Earth
And danced the skies on laughter-silvered wings;
Sunward I’ve climbed, and joined the tumbling mirth
Of sun-split clouds, – and done a hundred things
You have not dreamed of – wheeled and soared and swung
High in the sunlit silence. Hov’ring there,
I’ve chased the shouting wind along, and flung
My eager craft through footless halls of air…
Up, up the long, delirious burning blue
I’ve topped the wind-swept heights with easy grace
Where never lark, or ever eagle flew –
And, while with silent, lifting mind I’ve trod
The high untrespassed sanctity of space,
Put out my hand and touched
The Face of God.”

To order memorial trees or send flowers to the family in memory of Richard S Griffith, please visit our flower store.