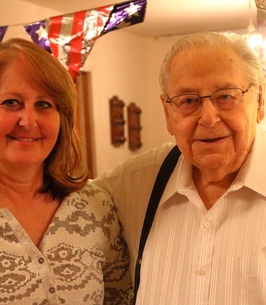 
Reinhold (Ralph) Stoll passed away peacefully November 9th, 2019 at the Community Living Center, Cheyenne VA Hospice. He was born to Katherine (Bechtold) and Peter Stoll on April 14, 1922 at home in Windsor, CO; the third of five children. Reinhold graduated from Windsor High School and joined the Navy, where he served during World War II in the Marshall Islands, Pacific. After returning from service, he married Willene (Weber) Stoll on September 22, 1947. They were married for 67 years. Reinhold worked at the local grain and feed mill associated with Colorado Milling and Elevator Company in Windsor. He was well known in the feed and grain business as a futures grain buyer and retired as vice president of Ranch Way Feeds in Fort Collins, CO. In addition, Reinhold continued to utilize his expertise in the milling and grain field to do consultant work in South America, Africa, and Russia.

Reinhold enjoyed fishing, camping, living at his cabin in Red Feather Lakes during the summer months, and playing golf. His hobbies included hunting arrowheads, woodworking and collecting wood planes. He was a long-time member of the B.P.O.E Elks of Fort Collins, the American Legion of Windsor, CO, member and Past President of the Colorado Cattle Feeders Association and a volunteer member of the Windsor Severance Fire Department.

Reinhold was preceded in death by his wife Willene, three siblings, and a brother-in-law: Pauline Lehr (Jerry Lehr), Albert Stoll, and Ruth Stoll. He is survived by his brother Harold, sister-in-law Dorothy Stoll and his eldest daughter and son-in-law, Barbara Nelson (Michael) and youngest daughter and fiancé, Susan Stoll (Jon). Ralph is also survived by six grandchildren and their spouses: Melissa Mireles (Elizabeth), Julia Phelps (Aaron), Sara (Terrence) Gibbons, Mitchell (Amber), Maria (Dan), and Miranda. There are also nine great grandchildren and two great-great grandsons, as well as nephews, nieces, and cousins. He was greatly loved by all and will be deeply missed.

Online condolences may be made at www.funeralservice.com.
To order memorial trees or send flowers to the family in memory of Ralph Stoll, please visit our flower store.