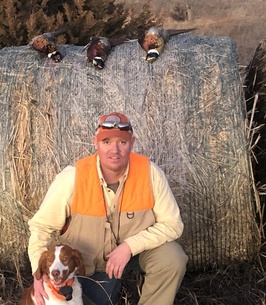 Nicholas “Nick” was born Oct. 13, 1977 in Hastings, Nebraska to William and Barbara (Homolka) Frei. He was raised in Hastings with twin sister Carena “Cari” Frei and Molly (Frei) Latchaw. Nick graduated from Hastings High School in 1996 where he participated in football, baseball and golf. He was a member of the 1993 Class A State championship football team and was inducted in the Hastings High School Hall of Fame in 2015 with his team.

After graduation he attended the University of Sioux Falls in South Dakota where he was a pitcher on the baseball team and earned a bachelor’s degree in exercise science in 2000. While attending USF he was the head student trainer and worked with the NAIA championship football team in 1996. While in Sioux Falls, Nick was a bartender at Champs Bar.

In 2002, he received his master’s degree in exercise physiology from South Dakota State University in Brookings, South Dakota. During his time in Brookings, Nick was a bartender at the Pavilion Bar and Grill.
Following graduation Nick initially moved to Casper, Wyoming where he helped coach a high school baseball team before moving to Colorado in 2002. His first occupation in Colorado was as a personal and athletic trainer at the Orthopedic Center of the Rockies and Performance Wellness Institute. He began his teaching career at Mountain View High School in Loveland, Colorado in August 2002 where he worked as the head athletic trainer and taught science.

Nick married Rochelle Brotsky in Estes Park, Colorado on June 7, 2008, and they welcomed their daughter Joslyn Jean Frei on May 8, 2010.

Nick loved the outdoors and spent his free time hunting, fishing - especially for walleye - and working on his cabin in Rustic, Colorado. He was an avid and accomplished golfer who competed in individual, couples and parent-child tournaments. He earned two hole in ones at his home golf course, Pelican Lakes Resort & Golf, in Windsor, Colorado. He also enjoyed cooking and canning his garden harvest. Nick taught himself how to make beer and wine and won Grand Champion honors at the Larimer County (Colorado) Fair. He was an devoted fan of the Nebraska Cornhuskers, South Dakota State Jackrabbits, Minnesota Vikings, and the Mountain View High School Mountain Lions.

Nick’s pride and joy was his 11-year-old daughter, Joslyn. They recently competed in a 14-week father/daughter Colorado Youth Outdoors program and won an archery contest. He loved the challenge of making his grandma’s famous potato dumplings, and even created his own special hot sauce recipe. Nick was full of stories and jokes. He always told the most amazing stories and was a master at practical jokes. He loved hosting friends for dinners and football-watch parties. He enjoyed going on Memorial Day and Fourth of July camping trips and treasured his annual pheasant hunting trips with his buddies to Grandma Alice’s place.

Nick was a regular attendee at the Ducks Unlimited Rocky Mountain Elk Foundation and Pheasants Forever banquets where he routinely won raffles, and was known to bust out a victory dance.

Nick is survived by wife Rochelle, daughter Joslyn, both of Windsor, sisters Cari of Omaha, Nebraska (children Austin and Madelyn of Albuquerque, New Mexico) and Molly (husband Jeremy and children Daniel and Alexander) of Vero Beach, Florida and grandmother Alice Kafka (Homolka) of Dante, South Dakota.
He was proceeded in death by mother and father William and Barbara Frei and grandparents Bob and Betty Frei and Eugene Homolka.

To order memorial trees or send flowers to the family in memory of Nicholas William Frei, please visit our flower store.

The service will be live streamed at live.redeemerconnect.com