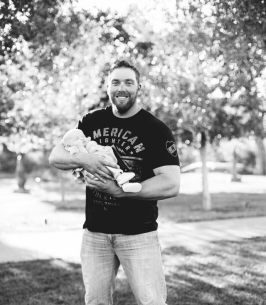 Matthew Ryan Ezinga, of Windsor, Colorado, took his final journey to be with his Lord and Savior on Wednesday, July 31st, 2019.

Matthew was born on April 10th, 1985 in Fort Collins, Colorado to Stephen and Jodi Ezinga. He grew up in a loving family home that his father built for them and he was one of three sons. Growing up, Matthew made many lifelong friends and many lifelong impressions, especially that of his talents on a basketball court and the incredible size of his heart.

Although Matthew chose not to further his education after his high school years, he went on to be a very successful and admired man. He worked many years alongside his father building and remodeling beautiful homes before transitioning into the oilfield where he then worked alongside his father-in-law, brother-in-law, and grandfather-in-law, among many friends. Matthew loved his career and he loved the people he worked with very dearly.

In 2012, Matthew met his wife, Breckin (Curtis). They had their first date where they then became inseparable. Matthew quickly became a very important pillar in Breckin’s and her two children’s lives. They dated for two and a half years when Matthew proposed to Breckin that mid-October and they married August 21st, 2015. Matthew and Breckin were blessed with two beautiful daughters, Madeleine, born August 2nd, 2016 and Olivia, born December 22nd, 2017. Although Matthew worked very hard to provide a beautiful life for his family and did a phenomenal job at doing so, there was nothing he did better than being a father and a husband. He radiated joy when he was with them. They meant the world to him and he meant the world to them.

Matthew loved being surround with family, friends and coworkers. He loved to hunt, he loved going to concerts with his wife and friends, he loved family vacations, he loved kayaking, he loved get-togethers, and more than anything he loved taking all the precious moments in. There wasn’t a soul that he met that he didn’t touch in some beautiful way. Matthew will be so dearly missed.

Matthew is survived by his wife, Breckin Ezinga, his children, Logan, Sophia, Madeleine and Olivia, his parents, Stephen and Jodi Ezinga; his brothers, Richard (Rachel) and Andrew (Jessica) Ezinga, his grandparents, Ray Ezinga, Richard and Bernice Wolf, and nieces and nephews as well as many other family and friends.

Matthew was preceded in death by his grandmother Jean Ezinga.

In lieu of flowers, contributions can be made to the Matthew Ezinga memorial fund in care of Mark’s Funeral Home at 9293 Eastman Park Drive, Windsor, CO 80550.

Rest in sweet paradise my love.
To order memorial trees or send flowers to the family in memory of Matt Ezinga, please visit our flower store.