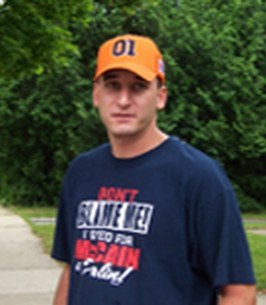 Mathew Charles Schindel, (Schindy), 41, passed away Saturday August 10, 2019 after a short and courageous battle.
Mathew was born to Charles H Schindel Jr and Nancy M Frueh Schindel, on October 12, 1977 at St Joseph’s Hospital in Beaver Dam, Wisconsin. He attended school in Las Vegas, Nv., Whittier, Ca., Aurora, Co and Waupun, Wis. He was on the Freshman Football team in Whittier, Ca.
Mathew worked at Menasha which had closed, Ponderosa, and worked for Strauss Feeds in Watertown. He later worked at Walker Manufacturing in Windsor, Co.
Mathew was an avid bowler by enjoying his Wednesday night league with the boys. He went to several different bowling tournaments in the State. Mathew was an avid fisherman, hunting of all kinds, playing volleyball in the summer, Loved Nascar, and was able to see several actual races in Dover Delaware where his Uncle Joe lived at the time.
He was an adamant Dallas Cowboy’s fan through and through with his Nephew Curtis H Ackley IV by his side. He took his mother, who is an avid Green Bay Packer Fan, to a Packer VS Cowboy game in Green Bay. The Packers won of course but it was a GREAT Mother and Son outing.
Mathew is preceded in death by Grandparents Earl (Gooby) and Florence Frueh, Charles Schindel, SR and Alice Schindel, Aunt Kathy, and Cousin Jerry Sell.
Mathew is survived by his parents Charles Schindel of Fox Lake, Step Mom Kathy (Tootie), Step Sister Trina Giese of Markesan, WI, Mother, Nancy Jones of Windsor, CO, daughters Autumn Schindel, Nisa Johnson, and his grandson Elliott Balistreire, who called him Papa Matt, Watertown, WI. His sisters Lisa Schindel of Aurora, CO, Sandra (Schindel) Saxby of Ashippun, WI and Amanda Schindel of Phoenix, AZ.
He is survived by a niece, nephews, great nephew, Oliver Tesch, aunts, uncles, cousins, other relatives, and many friends. He was Loved and we will miss him Dearly.
To order memorial trees or send flowers to the family in memory of Mathew Schindel, please visit our flower store.