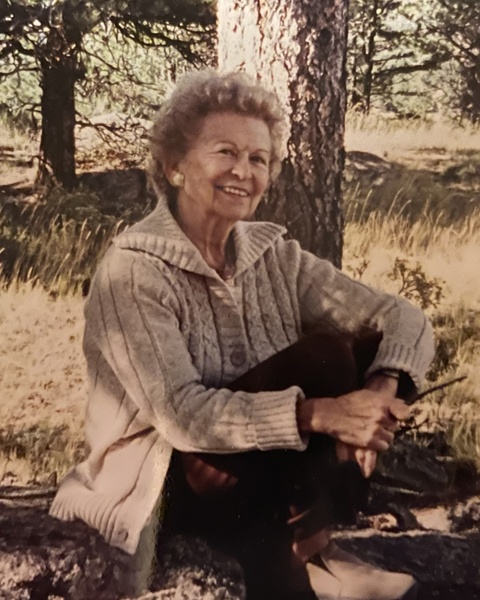 Mary Imelda Varkonda passed away on September 19, 2022 at her home in Windsor, Colorado at the age of 98. She was born on May 3, 1924 to Mary and Manuel Silva in Honolulu, Hawaii. She is preceded in death by her husband John Varkonda and 13 siblings. She is survived by her sister Connie DeSantos of Honolulu, Hawaii; her two daughters, Susan McKernan of Schertz, Texas and Michele Lohry of Windsor, Colorado; her four granddaughters, Katherin Mckernan, Rhiannon McKernan, Miranda Lohry, and Rachael McKernan.

There will be a funeral mass for Mary at Our Lady of the Valley in Windsor on October 14, 2022 at 2:00pm, reception to follow in the parish hall. Mary will return to Hawaii at a later date to be laid to rest next to her husband John. In lieu of flowers, the family requests donations be made to Pathways Hospice in Loveland, who were instrumental in her care in her final days. https://pathways-care.org

Mary was a third generation Portuguese immigrant to the Hawaiian Islands. She was one of 15 children and graduated from Maryknoll Catholic High School in 1942. At age 17 she was an eyewitness to the December 7th attack on Pearl Harbor, and to her final days could recount that experience in vivid detail. Mary worked at Hawaiian Telephone Company as a supervisor until she retired in 1968 to become a full time mother and homemaker. On January 29, 1950 she married John Varkonda of Youngstown, Ohio and together they raised two daughters, Susan and Michele. Mary and John were married 53 years years until John’s death in 2003. At age 78 she left her lifelong home of Honolulu, Hawaii to live with her daughter Michele in Windsor, Colorado. Mary’s secret to a long and active life was to keep both her mind and body engaged. The Catholic church had always been of utmost importance to Mary. She was a dedicated parishioner and extremely active in church life, especially Religious Education and Women’s Groups, both at her lifelong parish of Our Lady of the Mount in Honolulu and her new home parish of Our Lady of the Valley in Windsor. On May 20, 2017, she completed a Certificate in Biblical Studies from the Denver Catholic Biblical School at the age of 93. She attended the weekly senior luncheon, and occasional bingo game, at the Windsor Recreation Center as well as the weekly line dancing class up until age 95.