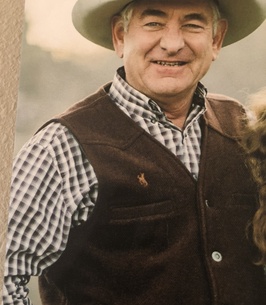 Mark Lane Ray was born in Lancaster, California on March 25, 1959 and passed away peacefully at his home in Nunn Colorado on October 21, 2019.

In 1978, while attending College in Goodwill Oklahoma at Panhandle State University Mark met Tam Shrader. The two were married on August 6th 1980 on Mark’s family farm and ranch in Lexington Oklahoma. This past year Mark and Tam Ray celebrated their 39th year of marriage.
Mark loved his family, if not guiding and teaching life lesson’s to his four kids you would find him wrestling with them on the floor of the living room playing what Mark called “Buckey Bull” this youthful behavior later carried over to the 12 grandchildren. Mark’s faith in God led him to be a perfect example of a stand up man, husband, father, grandfather, and uncle to all those around him. He was always patient and hard working.
Jory and Amanda Ray—grandchildren, Tara, Morgan, and Bryce.
Tramer and Dana Ray —grandchildren, Cameron, Coy, Case, and Clea.
Tyler and Christie (Ray) Thomasson—grandchildren, Kilynn, Kinzley, and Adilynn.
Vance and Brittany Ray —grandchildren, Vance Jr, and Connor.

He was a loving husband to Tam Ray for 39 years. Mark’s hobbies and passions over the years have changed as he aged, became a Grandpa and moved. In his early years he loved to rodeo, Rodeoing is what brought Mark and Tam together. They were both paying for part of their college by being on the PSU College Rodeo Team. Mark also loved the fair every year he would load up a lot of horses, some times a cow and what we all knew as his favorite livestock of all a lamb or two. He loved the fair and the time he spent there with his family. Later on in life he discovered 4 wheeling, he enjoyed riding through the trails of Colorado on his ATV.
He graduated from Lexington Oklahoma High School, where he played football, baseball, and rodeoed. He graduated college from Panhandle State University, with a BS in Agricultural Education. He taught school for one year. He was a banker for 30 years. The last five years he was self employed in oil and gas, with R3 Automation, in Windsor Colorado. Here he proudly worked with his two sons and really enjoyed the work. Mark was a very patient and hard working man. His faith in God made him the wonderful husband, father, and grandfather he was.

He is preceded in death by his parents, Gene and Elaine Ray and three brothers Clint (Fuzz) Ray, Doug Ray, Russel Ray, of Lexington Oklahoma.