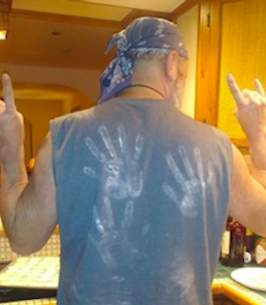 On March 26th, 2021. Mark W. Kempshall, born September 22nd, 1960, passed away from heart surgery complications. He is survived by the love of his life, Suzanne Muller-Kempshall, daughter, Caitie Muller-Kempshall-Cates, son, Charlie Fleming, his mother, Joan Kempshall, brother Scott Kempshall, and his nieces Megan and Allison. Mark worked at Kodak for the last 40 years. And was a long time Windsor, Colorado resident.

Mark spent his life working on all his many projects. From working on his Land Crusier, to the never ending upgrades to the house. His shop was his happy place, and usually where you would find him, door open and music playing. He built an amazing house for his family. Not just a house but a home. His home was his pride and joy. His sow's ear. Where he welcomed everyone in, offering every drink and snack he had avaliable, and not one person ever left without having a good laugh thanks to Mark.

Anyone that knew Mark knew how he would drop anything he had going on to lend a hand. To family, friends, neighbors, or strangers. Almost everyone he knew had something Mark helped with. He really had a heart of gold.

The love he had for his wife can't be measured. The bond they had was unbreakable. They belonged together from day one and were a team in anything they did. He made everyone a better version of themselves. He stepped up and became a father to 2 kids. He loved them relentlessly and tried to teach them as much as he could. His presence in their life was special, and his humor, knowledge, and love made a lasting impression.

Mark's life was cut short, the world is a lot dimmer, and he will be truly missed.

To order memorial trees or send flowers to the family in memory of Mark Kempshall, please visit our flower store.