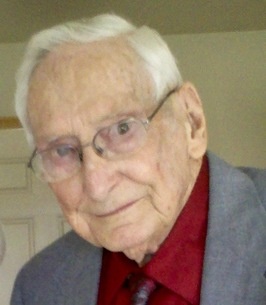 L. Kent Reitz, a 50 year resident of Windsor, Colorado, passed away on May 15, 2020, after a short non-covid illness. He was proud to be 99+ years old!!! Kent was married to Lois Christy who preceded him in death by three years. Not only did they have a loving marriage of 71 years, but also each of them treasured their friendships and life in Windsor and the various towns of these eastern plains. They moved from Rochester, NY, to Windsor with the opening of the Kodak Colorado plant in Windsor in 1970.

Kent was born in central Pennsylvania in Cairnbrook, and moved with his parents/sister to southwestern Pennsylvania because his father was involved with the coalmining industry. Kent travelled a long distance each day to attend Oakmont High School in Pittsburgh and then to Carnegie Institute of Technology (now Carnegie Mellon University) where he joined the ROTC program and earned a B.S. in chemical engineering in 1941. After the attack on Pearl Harbor, he was immediately drafted into the Army Corps of Engineers. Kent served in the South Pacific islands with the 822nd Engineering Aviation Battalion building runways/airports for the advancing troops from the New Hebrides to Leyte, Philippines and onward to Okinawa. Aside from his wartime experiences, he also grew to love flying airplanes that led to his great passion for flying/owning competitive sailplanes for the next several decades.

While in college, Lois’ and Kent’s families arranged for Lois to help the Reitz’ with a move to a new location. Soon a romantic relationship blossomed and Kent asked his parents to choose a wedding ring for his fiancée, Lois, while he was serving in the south Pacific. They waited for each other for four years and were married in western PA in early 1946. They then moved to Rochester, NY, where Kent worked for Eastman Kodak in paper/film manufacturing. While in New York they started a family with two daughters (Betty and Nancy) and that later expanded to two granddaughters, Jena and Hannah. In addition, they formed a close family relationship with their Swiss exchange student, Ursula, and eventually her whole family (husband Eugen and their three children Lilian, Felix and Bettigna)

Kent had many interests that included flying, hiking, woodworking, golfing, fishing, home repairs, traveling, camping, team sports and skiing. He was an active member of Faith United Church of Christ. He had many favorite haunts in the Rocky Mountains that he explored frequently with Lois and friends. He served on the Northern Colorado Medical Center’s Board of Trustees and Board of Directors for many years. He also served on the board at the Eaton Country Club. In Rochester he led a troop of Explorer Scouts for many years taking them on lengthy canoe trips in the wilds of Canada. He repaired countless old plumbing fixtures and painted many windows – all gifts of love – in his daughters’ homes!

He leaves behind a large group of dear friends of all ages and relatives including his immediate family, nephews (Bill, Kent, Dean, Don) and nieces (Carol, Pam, Sharon), neighbors, fishing/hiking/golfing buddies, church friends, Kodak colleagues, and his new family of friends at the Columbine Skilled Nursing facility who made sure he had exquisite care. He also served as a “grandfather and father” to many others.

We will all miss his humorous wisecracks, wisdom, understanding and patience, compassion, listening skills and advice, his smile and laughter, his support and especially his graciousness to all whom he met. Of course we will miss sharing his favorite beverage: lattes!

He was preceded in death by his wife (Lois), parents (Ethel and Joe Reitz), sister and brother-in-law (Joanne/Blackie Blackstock) and sister-in-law/brother-in-law (Margaret/Lloyd Ohl).

Because of the covid pandemic, we will be having a memorial service in his honor at a later date when it is safe to gather. If you wish, donations can be made in his memory to your favorite charity.

To order memorial trees or send flowers to the family in memory of Leonard Kent Reitz, please visit our flower store.