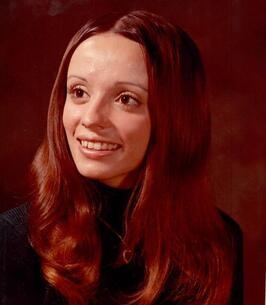 Juliann (Julie, Jules) Sue Hamilton 66, of Windsor, Colorado. passed away on Tuesday, March 29, 2022 with her family by her side.
She was born on June 20, 1955 to Velma and Jacob Berig in Greeley, Colorado.
Julie attended schools in Greeley until 1970 when she moved with her family to Windsor and graduated from Windsor High School in 1974.
On June 7, 1980 at Faith United Church in Windsor, she married David Hamilton and they had two children, Amber and Nick. They later divorced but remained friends.
Julie worked at Windsor Health Care Center, Windsor Schools Cafeteria and at Ed's place in Severance.
She belonged to a Gardening Club and loved to work in her garden and grow beautiful flowers. Later as her mobility declined, she would set on her porch and enjoy the flowers, watching and feeding the birds and the squirrels.
Julie loved to attend family gatherings and loved to spend time with her three grandkids, Damien, Dakiyla, and Daxton. At holidays, she enjoyed spoiling the grandkids. Julie was a devoted Mom, Grandma, Sister, Aunt and Friend living her entire life for her children and later her grandchildren who were the light of her life. She was known for her kind heart and open arms. She was also known as the family babysitter watching her nieces and nephews on the farm and remained close with them . Julie overcame many medical issues, always fighting hard until the end.
Julie is survived by her daughter Amber (Joe) Wadsworth, and her son Nick Hamilton all of Windsor, Colo.; One brother Roger (Anita) Berig of Greeley, Colo.; Three sisters Robin (Gary) Erbes, Tammie Alderin and Vickie Griess all of Windsor, Colo.; One step brother, Rodney (Jeannie) Stewart of Windsor, Colo.; Two grandsons, Damien Hamilton of Gill, Colo. and Daxton Wadsworth of Windsor, Colo.; one grand-daughter Dakiyla Wadsworth of Windsor Colo.; several nieces, nephews, and many other family and friends.
She was preceded in death by her Dad, Jacob Edward) Berig and Mom, Velma Stewart, her Step-Dad George Stewart, brother-in-law Perry Alderin; two nephews, Rusty Alderin and Rick Berig.

Memorial Contributions may be made to the family c/o Mark's Funeral Home, 9293 Eastman Park Dr. Windsor, Colorado, 80550
To order memorial trees or send flowers to the family in memory of Juliann Hamilton, please visit our flower store.