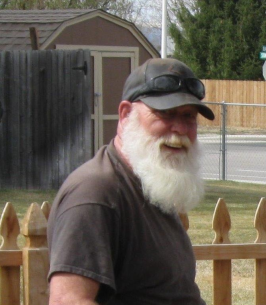 John was born September 16, 1960 to Robert Wilburn and Laura (Darcy) Linzey. One of 10 siblings and step-siblings. He was born and raised in Pennsylvania. He moved to Colorado in his early adulthood where he would eventually meet his future wife and start their life and family together.

John was as headstrong as he was loving — living his life unapologetically with a heart as big as his voice. He was never afraid to speak his mind and always wore his heart on his sleeve.

John had the “gift of gab” and could strike up a conversation with anyone. He always had a story to tell — often funny, sometimes wise, and occasionally one you may have heard a hundred times before.

After his early retirement, he enjoyed the simple things in life. He loved woodworking, doing projects around the house, and tending to his vegetable garden. He could often be found kicked back in his recliner with his dog, Billy, watching an old Western movie or just sitting out on his patio enjoying the sunshine. He loved fishing at the lake and cooking for the family.

John was a die hard Philadelphia Eagles fan and passed his love of football and the team onto his son, Matt, and grandson, Michael. He always joked that since the Eagles finally won a Super Bowl in 2018, that when his time came, he would be able to die a happy man.

He was a loving husband and father of three (now adults) who never stopped being the fun-loving and supportive man we knew growing up. He offered an endless supply of “dad advice” and “dad jokes” — whether you asked for it or not. He was the type of Dad that would take pride in all of our accomplishments, that would call every year on your birthday to make sure he got to sing you Happy Birthday, and was always willing to lend a hand when needed.

While he loved being a Husband and a Father, his true joy in life was when he became “Papa.” He loved doing everything with his grandkids from attending their baseball games to playing video games to playing with dolls and coloring. He loved to cook for the family and had been passing on much of his “culinary wisdom” to his grandson, Michael. He spent time on the weekends working and playing in the vegetable garden with his granddaughter, Lizzy. Whether it was playing outside with his granddaughter, Callie, or playing video games with his grandson, Matty — he really found so much joy in just being a Grandpa.

He is survived by his loving wife of 37 years, Brenda (Byers) Linzey. She was his strength in his time of weakness, his best friend, and often times his voice of reason. She supported him during his young and wild days all the way through to his very last days. He is also survived by his children: Jackie Linzey, Matt (DeEtta) Linzey, and Greg Linzey; and 8 grandchildren. Further survived by many brothers, sisters, nieces, and nephews.

He was preceded in death by his parents and his Granddaughter, Callie Linzey.

Though he will be greatly missed, he will never be forgotten.

Until we see you again... love and hugs!
To order memorial trees or send flowers to the family in memory of John Michael Linzey, please visit our flower store.

A private family service will be held.