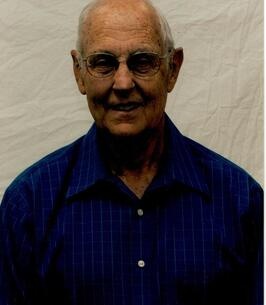 “When you pass through the waters, I will be with you.” Isaiah 43:2

John Bruce Douglas departed this world to join his Savior, Jesus Christ, on January 16, 2021 after a rich life lived in, on, and around water, including negotiating the storms of life but regularly in view of the promises of the rainbow. Born on March 31, 1934 in Milwaukee, WI, he grew up near and on the waters of Lake Michigan in Zion, IL, with his parents, Jack and Bertha Douglas and his sister, Kathy, where he was baptized. He taught himself to swim and to sail in those waters and his love of all things outdoors began there. After graduating from Zion Benton High School in 1952, he attended a trade school in Chicago to become a journeyman pipefitter and nearby Lake Forest University, where he earned college credits that he would eventually transfer to Colorado State University, from which he earned his Bachelor’s Degree in 1960. It was while he was attending CSU that he joined the Sigma Alpha Epsilon fraternity—a fraternity that included many young men who would continue to be lifelong friends. After all his schooling, he would still note that the most important course he ever took was Dale Carnegie’s “How to Win Friends and Influence People.” His many friends and the influence of his work and life hint at just how good he was at both.

Work and his beloved Uncle Fred drew him to Colorado, where his love of outdoors grew, as did his love for the frozen variety of water for which the Colorado high country is famous. A strong and graceful skier, he spent many weekend hours on the Ski Patrol at Loveland Basin and, later, not only taught his children (and more than a few others) to ski, but to love skiing. And when the days turned warmer, you could find him on—or more likely behind—a ski boat. His talents on water skis had their most notable impact in his life on June 8, 1962 at Horsetooth Reservoir, when he was set up on a blind date by mutual friends with a vivacious young High School teacher, Bobbie Harrold. Two years later, on June 6, 1964, they were married in Denver and then honeymooned with a trip through Yellowstone—including staying at Old Faithful Inn—and beyond. She was and always has been the love of his life and when he died, fifty-six years later, he was lying next to her.

Along with their two small children, Mark Alan (born 1966) and Tracie Wynne (born 1968), Bruce and Bobbie moved to Fort Collins in 1970, to start the first of three successful HVAC businesses that he ran: Wyco, Inc. Initially working out of their small rental home, they—along with a few friends and business partners—grew Wyco to be the largest industrial HVAC business in northern Colorado and southern Wyoming. After selling Wyco, he started and ran TraMar Mechanical, Inc. in 1991 and, later, established Douglas Mechanical, Inc., in 2009. His abilities as a businessman and mechanic, combined with his concern for his customers, led many of his customers to follow him from business to business. Many were the nights and weekends he spent making sure the heat and air conditioning flowed properly in businesses large and small. He was a member of Pipefitters Union #208 and Refrigeration Service Engineers Society, where he received the national V.V. Solomon Award for being an outstanding teacher/educator to a generation of younger pipefitters.

Generous with his time and talents, he regularly pitched in to help a wide variety of charitable organizations, including Camp Amakulo of Camp Fire, Inc., the Board of the New Mercer Ditch Company and, most notably, his beloved Timnath Presbyterian Church, where he served as a church elder and was recognized for his service by being honored as a lifetime trustee.

Storms did come during his life. Business was not always good or easy. The discovery of a cyst on his skull in 1979 led to four surgeries to first have the cyst removed and then, repeatedly, to deal with pains caused by the plate on his skull and the irritations it caused that led to fluid buildup putting pressure on his brain. And, in 2009, the diagnosis of prostate cancer led to a battle that he would fight—via surgery, radiation, chemotherapy, medicines, and diet—for over a decade until it eventually claimed his life. Yet in the midst of all these storms—even the last one—he never gave up seeking to live faithfully, act truly and fairly, and care lovingly for others.

Even in the midst of the storms, his work, and his service, he always found time for three things. First, he found time to escape to the outdoors. Time in the outdoors meant running (until the head surgeries mandated walking), skiing, backpacking, fishing, camping, and—perhaps above all—hunting. An avid and accomplished hunter, he kept the family freezer stocked with elk, venison, antelope, and pheasant. He passed on his love of the outdoors and hunting to his family and many of the places he most loved were hunting sites, usually near the rivers and streams of Colorado. He asked that his ashes be scattered near the banks of two particularly loved hunting sites. Second, he loved life on the family’s farms. Bruce was chief mechanic, having the tractors and implements ready for each haying season, keeping horses and his much-loved dogs, Missy, Chippy, Pippin, Meg, and Kit, and irrigating the fields (even when the farm’s pivot earned a few choice words after breaking down): this love of agriculture, too, he passed on to his children and, eventually, his grandchildren.

And, third, he found time for family. He was a wonderful husband to Bobbie, a great father to Mark and Tracie and father-in-law to Mark’s wife, Lindsay, and a terrific grandfather to Logan, Stratton, Duncan, and Sydney Kate. Many people will miss him, but they will miss him the most. Many people will celebrate his life, but they will feel the most gratitude. Many will shed a tear at his passing, but their tears will mix sadness at his passing, joy that he was such a deep and meaningful part of their lives, and trust that they will see him again in glory as their baptisms, like his, are eventually made complete.

He is survived not only by Bobbie, Mark, Tracie, Lindsay, Logan, Stratton, Duncan, and Sydney Kate, but his sister, Kathy, her husband, Jack Woodman, and numerous nieces, nephews, and cousins, as well as Bobbie’s sister, Diane Ewing, and her family.

A service celebrating the life of J. Bruce Douglas and bearing witness to the hope in resurrection will take place at 11:00 a.m. on Friday, August 13 at Timnath Presbyterian Church in Timnath, Colorado. A light lunch in the Fellowship Hall will follow.

Online condolences may be made at www.marksfuneralservice.com
To order memorial trees or send flowers to the family in memory of Bruce Douglas, please visit our flower store.