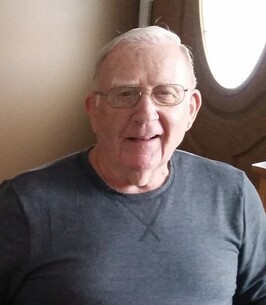 Jerry Offenbacker, 80, passed from this life on Friday, March 19, 2021. Jerry was born in Mound City, Missouri, on May 12, 1940, a Mothers’ Day present to Maxine (Lane) and Loren Offenbacker. He grew up on a farm in the area, but it was an opportunity during his high school years to operate a dump truck at a local rock quarry that started his life-long involvement in multiple facets of the trucking and transportation industry. Jerry was particularly drawn to over-the-road livestock hauling. The personal and professional relationships that he developed through his travels eventually led him to relocate to Colorado in the early 1980s. He went on to manage and operate various trucking businesses in the Windsor, Colorado area for more than 25 years.

Jerry was energetic and hard-working in all aspects of his life. He was never idle, and truly earned his reputation as a “can-do” and creative problem-solver. For Jerry, the world was not found in books and speculation…it was ‘out there’ on the horizon, to be sought out and experienced. He enjoyed working with his hands and creating tangible, impressive results, whatever the project might be. As a born risk-taker, Jerry inspired those around him to tackle problems and challenges with greater confidence. His many business associates, friends and family members knew all of this very well and truly enjoyed Jerry’s industrious nature, as well as his wonderful and ornery sense of humor.

In 1982, Jerry married the love of his life, Sharon (Greenwald), and they were blessed with nearly 40 years of marriage. Jerry was preceded in death by his parents. He is survived by his wife Sharon; 2 children; 4 grandchildren; several nieces and nephews; brother Jim (Mag) Offenbacker of Bedford, IA; sister Diana Browning of Poolville, TX; and many good friends.

A celebration of Jerry’s life will be held at a date and location to be announced later. In anticipation of those festivities, the family encourages you to go ahead and send a favorite memory of Jerry through the “Memory Wall” feature on his memorial page at www.marksfuneralservice.com. All will be appreciated and cherished by the family and Jerry's friends.

To order memorial trees or send flowers to the family in memory of Jerry Offenbacker, please visit our flower store.