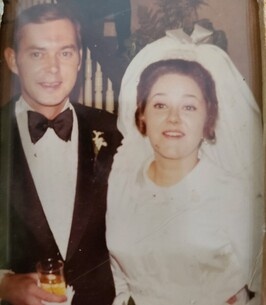 It is with heavy hearts that we say goodbye to Jenny Lynne Jarboe, also known as Jenny Lynne, or Mimi.
Virginia Lynne Doll was born in Portsmouth, Ohio on February 25th 1944. She graduated from Highlands High School in Fort Thomas Kentucky where she was a Majorette, and also in the band. She attended Western Kentucky University where she grew her love for the arts with activities like singing and dancing. She became an accomplished synchronized swimmer, and she even tried out for the Rockettes. She worked as a lab technician at the VA Hospital in Fort Thomas, and eventually at St. Jude’s Hospital in Denver. Jenny Lynne was a fun and loving person that enjoyed Colorado and the mountains. She loved to cross country ski and would often say, “I wasn’t born here, but I got here as fast as I could”.
In Denver is where she met her husband of 50 years, George Jarboe. She met George at a get together of mutual friends, and won his heart by taking him for a drive in a snowstorm. They were married February 19th 1972 in Fort Thomas, Kentucky. George took a job with Kodak in Rochester New York, but they found their way back to Colorado when Kodak broke ground on their Colorado division in Windsor where George and Jenny Lynne were happy to settle.
Jenny Lynne pursued her love of the arts and people by singing in the First Methodist Church choir, being a props master for the Windsor Community Playhouse, and participating with Habitat For Humanity, all while raising two kids and working for Lieser’s Drug. She was a lovely person, a caring and helpful wife, and a great mom. She will be missed by many.
She is preceded in death by her father Howard Doll and her mother Virginia Perdue Doll. She is survived by her husband George Evans Jarboe, her brother Howard Doll, her daughter Teresa, her son Jason, and 5 grandchildren.
To order memorial trees or send flowers to the family in memory of Jenny L. Jarboe, please visit our flower store.