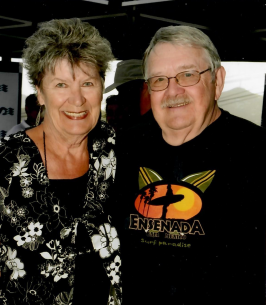 Jim was a compassionate and jovial man with a huge personality. You could always count on a comical one-liner or random dad joke followed by his famous giggle, as he always tried to keep things light. He was often referred to as the master of BS, a title he wore proudly. He never met a stranger, although he rarely remembered a name. Instead, he would either rename them or call them ol' whatchamadinger. He had a soft spot in his heart for animals, almost always having a little dog following him around the house and yard. Jim was loyal and dependable and had no problem standing up for what he believed was right. Some of the things that made Jim the happiest were: working in his yard; traveling the world with his love, especially to Lincoln City, OR; fly fishing; watching sports, especially the 49ers; peanut M&M happy hour; and above all else, his family. He adored and was very proud of his kids and grandkids.

In 1941, Jim was born in Spokane, WA, the last of four children of Frankie Taylor Miller and Clarence Eckman Miller. He grew up in Spokane, participating in his lifelong love of sports from tennis to football and hunting and fishing with his dad and brothers. Jim lost his mother at the age of 12, but was blessed with a loving and patient stepmother, Hazel Ford Miller.

Jim graduated from Washington State in 1965 and was commissioned as an officer in the Army. After spending 2 years active duty, including 13 months in Korea, he remained in the Army Reserves for several more years.

He worked for Boeing Aircraft in Seattle before entering the insurance industry in 1970 as an Agent. Jim was transferred to Billings, MT by Safeco Insurance Company and spent most of the years working as an Adjuster for the insurance companies that seemed to come and go from Montana at that time. He finished his career with Montana Claims Service. Jim also served on the board of directors for the Billings Heights Water District for many years.

Jim married Karen Gibson and they welcomed Raquel Lynn in October 1969. They divorced before he left for Montana and Jim married Kathy Russiff in November of 1975. Jodee Lynn was born April 1978 and Michael James in December 1979.

Early family vacations consisted mainly of hunting trips on family land south of Miles City, so the kids were raised on venison and loved it.

In August 2021, Jim was diagnosed with leukemia and after moving to Windsor, CO in the fall he passed away at his home surrounded by his three children and wife. Our family will forever have a piece of us missing but his legacy will live on through our memories.

Jim has been cremated and a family celebration will be held in the future.

The family wishes to thank his wonderful caring team from Pathways Hospice for helping us and Jim through the last few days. We are beyond grateful and could not have navigated this without them. Also, a special thank you to Jim's nephew, Bruce Harruff (Joan) for your continued support and assisting us during our move to Colorado.
To order memorial trees or send flowers to the family in memory of James Miller, please visit our flower store.