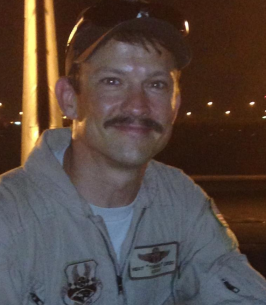 Jacob Daniel “Jake” Cirbo was born in Cheyenne, Wyoming on August 20, 1977, to Daniel Henry Cirbo and Valerie Ellen Haling Cirbo. Jake passed away peacefully, surrounded by family and friends on September 14, 2021. He is preceded in death by his grandfather, John Cirbo, his grandparents, Earl and Mary Haling, and uncle Cliff Tollefsen.

Jake – also known as Turbo – was a combat veteran and retired Master Sergeant in the United States Air Force Reserves, having served the 403rd wing as a member of OSS and the 815th Airlift Squadron, “The Flying Jennies" as a Loadmaster. In the span of his military career Jake flew both combat airlift missions and weather reconnaissance missions. He was a great career enlisted aviator. Apart from the military Jake also served as a Realtor on the Mississippi Gulf Coast. He most commonly attended First United Methodist Church in Gulfport, Mississippi, but loved to visit and experience different churches throughout his travels, making many friends along the way.
A thrill seeker to his core, Jake loved skydiving, scuba diving, flying, and fast cars. He was always game to try something new and usually excelled at it. As a trained and skilled carpenter, Jake was also adept at building things; his creative wheels always spinning.

Jake had a true heart for God. He was a special soul and a bright light in this world. His genuine depth of kindness was experienced by all who knew him. You always felt a spirit of happiness and joy when in his presence. And despite operating on “Turbo Time”, i.e. his uncanny ability to arrive late at all scheduled appointments, Jake’s unique charisma and charm always won people over.

Jake is survived by his partner of 20 years, Jennifer “JD” Crockett; his parents, Daniel and Val Cirbo; his sister Anna Cirbo and husband Jeremy McMillian; his brother Lucas Cirbo and wife Liz; his nieces and nephews, Rydyr and Miriya McMillian and Elijah and Micah Cirbo; and a plethora of aunts, uncles, and cousins.

If you would like to make a donation in honor of Jake you may donate to the Bethel Free Clinic in Biloxi, Mississippi at: https://www.bethelfreeclinic.org/
Forever Blue Skies.

To order memorial trees or send flowers to the family in memory of Jacob Daniel Cirbo, please visit our flower store.