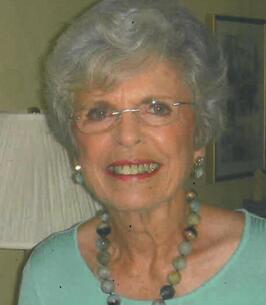 Helen was born on February 27,1933, to Madeline and Ralph Wheeler in Austin, MN. Helen grew up in Austin, MN and graduated from Austin High School in 1951. Helen met Robert Thatcher at the Austin Municipal swimming pool while in high school. After high school, Helen attended Williams Woods College in Missouri.

She and Robert married in 1952 and were married for 67 years. Following their wedding, Helen and Robert moved to Oklahoma where Robert graduated from Oklahoma University. They then returned to Austin, MN where Robert worked at Hormel. Helen was a member of Women’s Association Austin Symphony Orchestra, Eastern Star, Floral Club, PEO Chapter AQ, Book Club, and Collectors Club. She was an active bridge and mahjong player. She enjoyed golf, tennis, needlepoint and travel. Helen and Robert took their grandchildren on many trips around the United States and Europe. Helen and Robert went on trips around the world together over the course of their lives.

Helen will be remembered for her thoughtfulness, kindness, generosity, and love for her family.

A private service will be held for family.

Online condolences may be made at www.marksfuneralservice.com.
To order memorial trees or send flowers to the family in memory of Helen Marlene Thatcher, please visit our flower store.