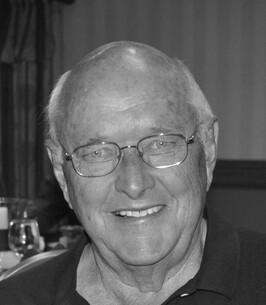 Glenn Thomas Haiston, beloved husband, father, grandpa and friend to many, passed away peacefully January 26 at his home in Windsor, Colorado at the age of 84.

Tom was born September 9, 1936 to Glenn and Margaret (Holling) Haiston in Omaha, Nebraska where he joined his older sister Luella. The family moved to Broadwater, Nebraska and then settled in Gering, Nebraska.
Tom’s work ethic became apparent at a young age as a newspaper delivery boy in Gering, during the ’49 blizzard. That ethic continued into high school when, not yet old enough to drive, he finagled a job as a delivery truck driver for a lumber yard. He also displayed hard work and talent on the football field and basketball court as a player for the Gering Bulldogs. “He was a stud,” according to Tom’s grandsons. When he was 16, Tom set his sights on Patricia Ann Wellman, a new freshman in his math class. They went on to become high school sweethearts. After Tom and Pat graduated from Gering High School in 1956, Tom went to study and play basketball at Sheridan Wyoming College. Pat went to business college in Denver. After a year apart, they knew they wanted to spend the rest of their lives together and got engaged. Tom had ordered a 1957 yellow Corvette with the money he had saved over the years, but instead put the money toward an engagement ring. On July 7, 1957, Tom and Pat married at Gering Methodist Church. Tom promised Pat’s dad that he would protect and take care of her forever.

The newly married couple moved to Reno, Nevada where Tom took a job with the Southern Pacific Railroad. They moved back to Scottsbluff in November 1957 where Tom worked jobs at Gering Sugar Factor and Swift & Company dreaming all along of owning his own business. In June 1958, 21-year-old Tom, with just $550 in his pocket and a ’47 Chevy, opened a service station on 27th St in Scottsbluff, that had been closed for years. The contract consisted of “a handshake and a promise over a blacksmith’s anvil.”

Tom and Pat welcomed their children, Jackie in August of 1958 followed by Jeff in June of 1960. Jackie and Jeff remember their dad as a fearless, industrious, persistent salesman who always told a great story. Tom’s life followed this idea; “Opportunity is missed by most people because it is dressed in overalls and looks like work” Tom and Pat were life and business partners who worked together to grow Haiston Oil Company into a successful business. In 1975, Tom purchased the Texaco Bulk Plant and later became a Texaco distributor.
During the years, Tom was much more than a family man and businessman, he was a valued friend to almost anyone he encountered. He had an uncanny intuition through which he sensed when friends needed help. Tom’s intuition not only changed the lives of friends for the better, but even saved some lives. The daughter of one of Tom’s good friends stated, “You were my dad’s hero, you made him who he is today.”

In 1992, Tom and Pat embarked on a new adventure. They moved to Colorado where they purchased a Conoco Bulk Fuel Distributorship – a business they ran until Tom’s retirement in 2004. Tom never really retired. In addition to “always fixing things,” he did what he always enjoyed most: traveling, enjoying the outdoors, hunting water fowl, skeet shooting, playing with his beloved black Labrador dogs, fishing and teaching lessons to his five grandsons. Tom told each grandson “Don’t let the bastards get you down”

He also continued to be a good friend to those around him. One of Tom’s grandsons wrote, “Anyone who experienced the pleasure to know Tom felt his instant grace and compassion. His presence alone would make you feel secure. He is a strong spirit that will be missed greatly, he led from the front and made sure no one was left behind.”

Shortly after his death, the family found a little folded note in his billfold which Tom had scrawled his final thoughts:

“Do I fear Death? No, I will look Death in the eye & look for opportunity!”
“Death will take my body, but the man inside will live on. “
“Cremation: don’t overcook me.” and “Old age is undefeated.”

Tom also wanted everyone to know that his favorite song was “My Way” by Frank Sinatra but that he would have changed the ending to say “I did it my way…and Pat fixed it!”

Due to government restrictions, a celebration of Tom’s life will be held at a later date.

Online condolences may be made at www.marksfuneralservice.com.
To order memorial trees or send flowers to the family in memory of Tom Haiston, please visit our flower store.