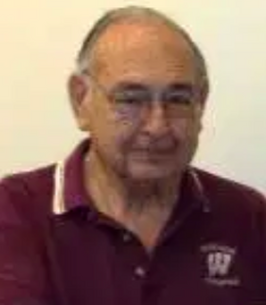 Gene was born on January 11, 1930 to Clifford and Lydia (Hutt) Morey in Windsor. Gene graduated from Windsor High School in 1948. Gene spent 4 years in the Navy and served aboard the USS Helena during the Korean conflict. He received his Honorable Discharge in 1954.

Gene graduated from Colorado State College (now University of Northern Colorado) with a Life Certificate in Teaching. After College Gene worked as a Scout Executive. It was while working as a Scout Executive in Sterling, Colorado that he met his wife Elvada Nitschke. After the birth of their first son, Colin they moved back to Windsor. In the fall of 1965, he joined the Windsor RE4 school staff as a teacher in arts and crafts. He taught for twenty six and one half years before retiring in 1991. In addition to his role in teaching, Gene also drove a school bus and took tickets for the schools athletic events. Gene also remained active in Scouting with Windsor Pack 57 for eighteen years.

When Gene retired he remained active in the Windsor/Severance Historical Society, the Windsor Tree Board and the First Christian Church where he served on the Church Council and as an Elder. Gene and Elvada received the Windsor Citizens of the year award in 1978 and were named Grand Marshalls for the 1995 Windsor Harvest Festival Parade.

Gene is survived by his brother Tom and two sons Ty and Kevin. Gene was preceded in death by his parents, his wife Elvada and his son Colin.
To order memorial trees or send flowers to the family in memory of Gene A Morey, please visit our flower store.