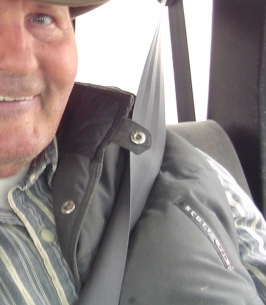 Chris was born in Rawlins, Wyoming September 23, 1936 to Gail A. Willis Sr. and Lillian Johnson Willis. He attended school in Rawlins and graduated with the Class of 1954. As a young boy of 8, Chris spent the summer with neighbors Dick and Signa O’Bannon at their ranch near Durango, CO where he began his love of agriculture and ranching. During summers while in high school and college he worked for various ranching families in Carbon County, WY - Swanson’s in Saratoga; Vivian’s, Sun’s and Rochelle’s in the Rawlins vicinity - doing everything from herding cows to shearing sheep. Chris attended Colorado State University in Fort Collins, where he was a member of the agricultural fraternity Alpha Gamma Rho. In 1959, while at CSU he was drafted into the army and stationed at Fort Sill in Lawton, OK where he met Darlene Gaidaroff who was attending Oklahoma College for Women in Chickasha. They were married in Tuttle, OK on September 9, 1961 and upon his discharge that year they settled in Rawlins, Wyoming. During their 10 years in Rawlins, Chris worked for Bus Rendle at the Buzzard Ranch, was a “coyote gunner,” had his own ferrier business, fashioned doormats from used tires and generally just loved working with his hands. He was a lifetime member of the Elks Lodge. In 1965, he went to work for the Sheriff’s Department, eventually became the Undersheriff and served in that capacity until 1971 when he moved his family to Windsor, CO. Children Glenn Allyn and Elisa Marie were born in Rawlins and the youngest, Wade Thomas was born in Greeley, CO. Chris worked at the Eastman Kodak plant until his retirement in 1991. Chris then spent his time overseeing his rental properties in Greeley, going to estate sales and auctions, having morning coffee meetings with friends, working in the shop in his garage, and enjoying time at the “summer home” in Saratoga.

Chris is survived by his loving wife Darlene of 58 years; daughter Elisa and her husband Jeff Smith and grandchildren Braelyn, Baden and Quintan of Overland Park, KS; son Wade and his wife Dulcie of Fort Collins, CO; and daughter-in-law Darlene Carter Willis and grandson Blake of Sugar Land, TX grandson Grant of Keller, TX; sister Helen and her husband Bob Sheppard of Casper, WY as well as numerous nieces and nephews and many dear friends to whom he was faithful throughout his life.

Friends, family, and loved ones are invited to a backyard open house at the Willis residence, 713 Walnut Street in Windsor, CO on Saturday, August 31, 12pm-2pm. A private family service will be held in Saratoga, WY the following day.
To order memorial trees or send flowers to the family in memory of Chris Willis, please visit our flower store.