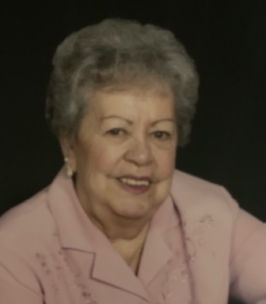 On October 25, 1947, she married the love of her life, Marcos “Max” Contreraz at Our Lady of Peace Catholic Church in Raton, New Mexico. Max and Edna were married 70 years, 6 months, and 12 days when Max passed away. They lived in Trinidad, Denver, Greeley, Fort Collins, and in Windsor since 1969. She was a wonderful mother, grandmother, aunt, neighbor, friend, homemaker & bookkeeper when they farmed in Fort Collins.

For 19 seasons Edna & Max sponsored three baseball teams for Windsor Rec Dept. known as “GrandPa’s Kids ” t-ball, mustang & traveling teams. At the end of each game Edna & Max would take a cooler of cold sodas, then at the end of each season Edna & Max would have a team potluck and gave out trophies to their team members and coaches. One of Edna’s favorite things to do was dance with Max & it didn’t have to be at a celebration or at the American Legion or VFW it could be in their kitchen. They were great dancers and so much fun to watch.

Years ago, when they would go walking downtown Windsor hand in hand, they were called the “Lovebirds” of Windsor. Edna was quite the character too. Edna was an active member of the American Legion Order of Women & a member of Weld County Democratic Women Committee. Her most favorite thing to do was being with her family.

Edna was a member of Our Lady of the Valley Catholic Church in Windsor. During Christmas time Edna and Max had the whole house decorated inside and out with many Christmas characters spread across his front yard for the community to enjoy. She enjoyed baking, making jams and spending time with family and friends. Her amazing tamales she made were very well-known in Windsor as were her breakfast burritos.

She is preceded in death by her parents, Daniel and Eloisa Chacon; husband Max Contreraz, four children Linda, Guadalupe, Maxine Clark and Frank Contreraz; Daughter-in-law Pauline Contreraz; siblings John and his wife Jennie Chacon, Conception Ben Chacon and his wife Elaine. Edna was the last of the Chacon – Contreraz generation, the “Greatest Generation.”

Memorial contributions may be made to Our Lady of the Valley Catholic Church Windsor Religious Education Program.

Online condolences may be made at www.marksfuneralservice.com.
To order memorial trees or send flowers to the family in memory of Edna Theresa Contreraz, please visit our flower store.