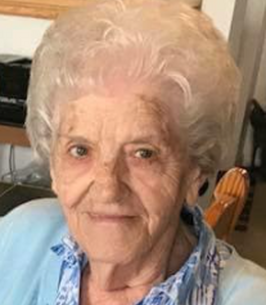 Dorothy Peif, 93, of Greeley, passed away Feb. 12 at the home of her daughter Sherrie.

Dorothy was born May 6, 1927 in Greeley to Fred and Elizabeth (Woit) Martin. Dorothy grew up in Greeley and got her high school education at Greeley High School. In 1945, she met the love of her life Albert Peif, Sr. at the roller-skating rink. They were married on Feb. 7, 1946. They were married for 40 years before he passed away Dec. 28, 1986. She told her family then she would never love anyone else, and she kept her promise, talking frequently for the past 34 years about the day she would be with him again.

In the early days of their marriage, the couple farmed in Fort Morgan, but Dorothy had a love for cooking, and after working in food service for Greeley-Evans School District 6 she and Albert owned and operated Al’s Diner in Greeley for 11 years before his passing. Dorothy continued to operate the restaurant another 11 years until 1997 by herself. During that time, she was a Greeley Stampede Gold Spur, cooking up her famous fried chicken and mashed potatoes for others to enjoy during the rodeo performances.

After selling the restaurant in 1987, she worked for several years in the kitchen at Greeley Producers until she finally retired in 2002 at the age of 75. Dorothy then helped her daughter with a home childcare business and played grandma to many children from birth through graduation.

Dorothy was an athlete her entire life. She was a pitcher on several girls and women’s softball teams over the years and bowled for more than 50 years until she finally “retired” from the sport in 2010 at the age of 83.
Dorothy lived on her own in Greeley until August of 2020 when she fell and broke her hip. Until that time, she enjoyed walking, traveling, and visiting with her friends and family, especially her grandchildren. In 2019, she traveled to Arkansas and met her first great-great grandchild, which completed five-generations of Peif women.
She was a diehard Bronco and Rockies fan to her death, even naming a pet betta-fish “Arenado” after her favorite player. She enjoyed watching her youngest grandson, Braydon, pitch in both high school and college, and always talking about her days as a pitcher with him.

After she broke her hip, Dorothy developed dementia, but her final months were her parting gift to her family, laughing, talking, and taking pictures with them. She specifically thanked them, told them she loved them made them promise to bring her flowers after she died.

In lieu of flowers The Family asks that Memorial Contributions be made To the Weld County Food Bank.