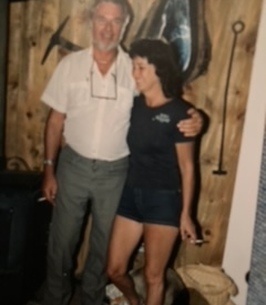 On May 28th, 1941 Roger and Bernice Cowell gave birth to their third daughter, Donnabelle. Growing up on their Ranch south of Lusk, Wyoming she rode her Arabian horse over the hills, played with her pet skunk and painted. With her long dark hair flowing while riding bareback she resembled the beautiful Indian princes she portrayed in the annual Lusk Pageant. She was also blessed with musical and artistic talents including playing the flute, accordion, piano, and her personal favorite the organ. In high school she played at the Silver Spur lounge and was even featured on local TV. Later in life she would join in on impromptu jam sessions playing fun polkas and waltzes and golden oldies with family and friends.

After graduating high school early in 1959, she and her parents moved to Loveland Colorado where they opened the Dairy O Drive-In next to Lake Loveland. And this is where she soon met Larry Brunmeier as he rode in on his 650-triumph motorcycle. On November 22, 1959 they eloped to Taos, New Mexico and Donna became Larry’s beautiful little bride.

The young couple set roots in Loveland where Larry drove a semi-truck and worked construction. Soon they welcomed a daughter Valerie in 1961 and then a son chad in 1966. Donna was always at Larry’s side in all adventures. Larry loved to race and Donna quickly showed her competitive side by joining in. They participated in a few crazy ideas including tricycle races down the steep hills at the old brick yard [yes real children’s tricycles!]. They also did four wheeling and snow bashing up Storm Mountain and Buckhorn Canyon. Donna was one of the best at ice racing. She was hard to beat and she had the trophies to prove it! Their love of 4 wheeling led Larry to start the Big Thompson 4 Wheelers club.

In 1971 Larry and Donna started B & B Building with Larry’s father Leonard and brother Don. Donna embraced all the company activities from Bookkeeping to Finish work. She was very handy with a trim hammer. Donna was known for being a force of nature once she set her mind to something whether it be a task for Larry or an argument with her children. She was strong, capable, and self-reliant. Donna also worked at Teledyne Waterpik Co and Atlas Moving Co. At both jobs, Donna made lifelong friends.

Donna and Larry enjoyed Elk and Deer hunting together and filling the freezer to feed their family thru the year. Donna was an excellent marksman and she learned to process game, cows, pigs, and chickens from hoof to plate. She would skillfully attack what was put in front of her. She was also a successful home canner who made a phenomenal V8 juice that was perfect for bloody marys or red beers for the Sunday Bronco games. The love of the mountains meant there were many camping and fishing trips either with boat at Lake John or Lon Hagler, or brookie fishing in the many streams around red feathers or in Walden Colorado. Later in life they enjoyed their pontoon boat fishing and cruising the Grand Lake of the Cherokees in Oklahoma. It was here they bought a small place with boat dock and a neighborhood of wonderful people who became dear friends for life.

The people in their life loved Larry and Donna so much that on their 25th wedding anniversary a surprise vow renewal party was thrown for them. The party included Darrel Jorgenson who performed the ceremony in a backwards bathrobe while Donna wore her daughter Valerie’s prom dress. Part of the festivities was a money tree which paid for a special honeymoon in Mexico that they had always dreamed of.

Being creative came easy to Donna. She enjoyed painting, knitting, wood working, and making personalized gifts from mailboxes to Christmas decorations. Despite her strength and determination, Donna was a soft-spoken woman with a warm smile who never complained even while caring for Larry and taking care of the business when he was not able to.

Donna and Larry’s last business venture was L & D storage rental units in Windsor Colorado. Larry and Donna built and designed their home next to the business. Larry’s death in 2014 left Donna alone with a broken heart but the strong Wyoming cowgirl carried on taking care of the business and her 2 dogs rowdy and odie. Donna continued to travel by herself to Oklahoma and to Lusk to visit her sister Bertie and her many nieces and nephews. She also drove to Nebraska to visit Chad and attend granddaughter Maggie’s wedding to husband Ty.

2020 was a rough year for Donna. It started with a broken hip and was followed by a cancer diagnosis. Treatments reduced the cancer by 90 percent, but several falls during the recovery led to broken ribs and a fractured wrist. All of this added to the stress on her already broken heart which led to her peaceful passing on January 1st, 2021 so she could join the love of her life.

She is survived by her Daughter Valerie Brunmeier of Cloverdale, CA., her son Chad Brunmeier from Bayard, NE., granddaughter Maggie (Ty) Dickey of Bayard, NE., and her two loyal companions Rowdy and Odie.

Services will be held at a later date.

THE DASH
by Linda Ellis

I read of a man who stood to speak at the funeral of a friend. He referred to the dates on the tombstone from the beginning… to the end.
He noted that first came the date of birth and spoke of the following date with tears, but he said what mattered most of all was the dash between those years.
For that dash represents all the time they spent alive on earth and now only those who loved them know what that little line is worth.
For it matters not, how much we own, the cars… the house… the cash. What matters is how we live and love and how we spend our dash.
So think about this long and hard; are there things you’d like to change? For you never know how much time is left that still can be rearranged.
To be less quick to anger and show appreciation more and love the people in our lives like we’ve never loved before.
If we treat each other with respect and more often wear a smile… remembering that this special dash might only last a little while.
So when your eulogy is being read, with your life’s actions to rehash, would you be proud of the things they say about how you lived your dash?

To order memorial trees or send flowers to the family in memory of Donna Brunmeier, please visit our flower store.