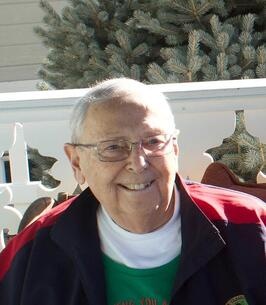 Don, 82, of Windsor, CO passed away at Medical Center of the Rockies on December 26th, 2021 with his wife and two of his children at his side. His last words to his loving wife of 62 years were “God is Good”.
Don was born in Riverton, Iowa to Max and Gladys (Reynolds) Moore. Don spent his younger years in Alliance, NE where he met his future wife Marilyn Serbousek of Hay Springs, NE. In March of 1959 Don and Marilyn were united in marriage and were blessed with 3 sons.

Don’s career with Amoco took him to Oklahoma and Colorado. After 32 years Don retired and moved to Sunny Arizona for a short stay before returning to Colorado to be near family. In his younger years he was active in the Jaycees and later on served on multiple HOA boards and the Lions. One of his favorite hobbies was playing the game of Golf.

Don was a man of faith who loved the Lord and his family. Some of his favorite things to do were attending the men’s breakfasts and bible studies, spending time with his family, talking, enjoying a meal and playing cards. Don loved his card games and ice cream.

Don was preceded in death by his parents, 3 brothers and his sister. He is survived by his wife, 3 sons, Kurt (Sandy) of Lutz, FL and two children Katelyn (Merritt Perry) and Colin (Marisa). Craig (Teresa) of Aurora, CO and two children Max and Madeline. Jeff (Rala) of Windsor, CO and one child, Meranda (Tyler Zeller), brother Douglas Dale Moore (Sue) of Kansas City and many nieces and nephews.