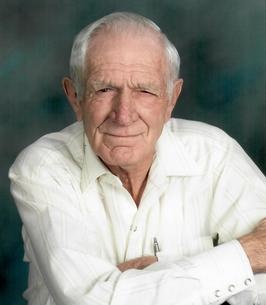 Donald Elmer Abbott
October 14, 1926 | February 9, 2019
Born in Ovid, Colorado to Elmer Abbott and Violet Marshall.
Don graduated from Ovid High School in 1943 and joined the Navy in 1944. He served in WW II and the Korean War on the USS Iowa and Colorado. He earned his private pilot’s license in 1947.
Don and Irene Crumley were married December 18, 1951 at First United Methodist Church in Windsor, Colorado. He joined the Windsor School District in 1953 as a transportation mechanic and groundskeeper, retiring in 1993.
Don proudly served as a member of Windsor/Severance Fire Department for 36 years (1954-1990) and was elected Chief seven different times. Additionally, Don served on the Board of Directors for the Fire District from 1978-1986. He also served on the Northern Colorado Radio Board for Fire Districts and was a Town of Windsor Trustee 1960-1962.
Don is survived by his brother Bob Abbott, son Jim Abbott & wife Grace, grandchildren Derek and Denton Shaffer, Amy & Chris Thacker, Nichole Abbott, Kelly & Zeke Rodriguez, Carrie Wissell & Trent Weitzel, 6 great-grandchildren and many nephews, nieces and cousins.
Don was predeceased in death by his wife Irene, daughter Donna Shaffer, parents Elmer and Violet Abbott, brother Jim, sister Jean Dillon & sister-in-law Joan Abbott.
A memorial service will be held 10:30a.m. Friday February 22, 2019 at First United Methodist Church, 503 Walnut St., Windsor.
The Abbott family would like to thank Home Instead for their unwavering kindness and care.
In Lieu of flowers memorial gifts may be made to Realities For Children in care of Marks Funeral Service, 9293 Eastman Park Drive, Windsor, Colorado. 80550
Online Condolences may be at www.marksfuneralservice. com
To order memorial trees or send flowers to the family in memory of Don Abbott, please visit our flower store.