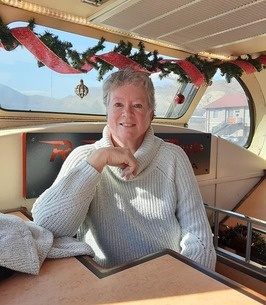 Diana Rae Davies passed away unexpectedly on February 21st, 2020 at Medical Center of the Rockies in Loveland, CO after a brief battle with cancer.
Diana came into this world on November 16,1957 at the old Douglas County Hospital in Omaha, NE to Charlie & Nola (Cowell) Clark. She was the eldest of four daughters. She received a traditional Catholic education at Holy Ghost School in Omaha where she attended from 1st through 5th grade. In 1968 the family relocated from Omaha to Grand Island, NE. In 1974 they moved to a farm near Cairo, NE. Diana attended school in Grand Island at Engleman School from 6th through 8th grade and then attended Northwest High School where she graduated in 1976. She played clarinet in the high school band and took many years of French language which she loved. She gave birth to her oldest daughter, Stephanie Michelle, in 1976. She was united in marriage with Scott Dennis, Sr. in 1979, with whom she would have two more children; Scott Jr. in 1980 and Lauren Rose in 1993.
Diana worked for the Nebraska Department of Roads for many years in Grand Island until she started her dream job of running her own in-home daycare business in 1990. Shortly after Lauren’s birth, the family relocated to Fort Collins, CO, near the beautiful Rocky Mountains which she treasured. Initially, she pursued a career in media publishing and later took on a production leadership role at Woodward Governor for almost 10 years. She remarried in 2001, to David Davies, and they made their home together for many years in Severance.
Diana loved her family first and foremost, especially her children. Her children were everything to her and she absolutely adored all of them. She was born to be a mom and unquestionably loved being one, taking care of her younger sisters as well. She always was thinking of others and wouldn’t hesitate to drop everything and help wherever and whenever she could. She was a mom and a devoted friend to everyone she knew throughout her life, including the friends of her children, and her co-workers.
Education was very important to Diana as she had returned to school several years ago to pursue a degree in accounting from Aims Community College. She enjoyed learning new things and always encouraged individuals to pursue their dreams.
Diana was a devoted and loyal fan of the Nebraska Cornhuskers football team for all her life as any true native of Nebraska would be. She also adopted the Denver Broncos after moving to Colorado as well. Yelling at the television set was a common occurrence whether or not either team was doing well or poorly!
She had a deep appreciation and love for music of many different kinds. Some of her favorites were musicals, The Osmond Brothers, and the Monkees (especially Davy Jones). Diana loved the musical Godspell so much that she saw it in the theatre 14 times! Diana was an avid reader, particularly mystery stories, and had a huge collection of Nancy Drew books. She also enjoyed playing all sorts of games like Monopoly. She had quite the green thumb and delighted in tending her garden, which was built especially for her by her husband David. They spent many hours together creating a veritable wonderland of a backyard complete with pool, hot tub & rock spring.
Diana loved to travel and was fond of road trips. She roamed to memorable locations such as Manitou Springs, Yellowstone, Jackson Hole, South Dakota and many others. She got to go on a trip of a lifetime with her husband David to his native country of Wales, where she met David Emanuel, the designer of Princess Diana’s wedding dress. Diana was a tremendous fan of the Princess.
Diana relished cooking all sorts of delicious and wonderful meals for her family and friends. Some of her most treasured possessions were her many cookbooks. It was not possible to go away hungry from her home, especially at Thanksgiving and Christmas get togethers!
She was preceded in death by her beloved parents Charles Joseph and Nola Juanita Clark, nieces Maria and Angel Hamilton and brother-in-law Kurt Schuyler. Survivors include her loving husband David Davies; sisters Susan (Jim) Hamilton of Omaha, NE, Jan (Ken) Simons of Cairo, NE, Joan (Larry) Failor of Loveland, CO; her daughters Stephanie Dennis of Longmont, CO, Lauren Dennis of Fort Collins, CO; son Scott Dennis, Jr. (Jen Barnes) of Fort Collins, CO; granddaughter Kalli Kerns of Fort Collins, CO; and many nephews, nieces and friends.
To order memorial trees or send flowers to the family in memory of Diana Davies, please visit our flower store.

Visitation will be 1 Hour Prior to the service.