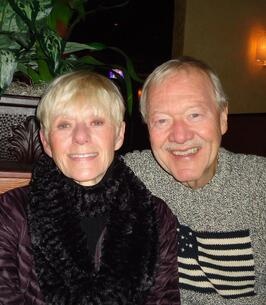 David graduated from Cathedral High School in Belleville, Illinois and grew up in the family business. In the 1940’s, The Dutch Girl (originally operated as Okaw Dairy) was the place to go for ice cream and miniature golf, and was the original home of WIBV 1060AM radio. The Dutch Girl evolved into Fischer’s where David later became part owner of the restaurant and sole owner of the neighboring Hyatt Lodge. For decades, Fischer’s Restaurant was a mainstay in Belleville for generations of families and developed a faithful following of “regulars.” Fischer’s pizza and fried chicken was a strong favorite among locals, still missed by many today.

David and wife, Pat, first met in 1966 and ultimately married October 11, 1992. They were best friends, their thoughts ran parallel, they finished each other’s sentences, and they enjoyed long walks along the nearby river. They enjoyed being out and about until COVID stepped in, yet they managed to maintain their lifestyle in the comfort of home with close friends who agreed to self-isolate as well. David will be deeply missed by Pat, the love of his life. David A. Fischer had a phenomenal life and was a remarkable person to have graced this earth. Lucky you, if you knew him!

In 1995, David and Pat opened Dave’s Saloon in Belleville, Illinois. The idea was based on the famous Field of Dreams movie quote, “If you build it, they will come.” Which they did. The Saloon quickly became a popular watering hole in downtown Belleville known for friendly gatherings and delicious food.

David and Pat enjoyed their retirement years by moving to beautiful Windsor, Colorado in 2000, where he enjoyed several activities which included treasure hunting the garage sales, gardening in his colorful yard, cooking and baking delicious homemade pies (especially cherry and rhubarb), and attending weekly “coffee and donut club” meetings with the guys and gals. As if this wasn’t enough, to avoid boredom, David also worked part-time for eight years doing maintenance for a Colorado State University student housing property management company. And of special note, countless good times were had when David spent time with his childhood friend, Roger Kaufhold (Linda Josephson), at Roger’s gorgeous mountain cabin in Idaho Springs, Colorado.

David will forever be remembered for his quit wit, sense of humor, genuine and caring personality, and wonderful (often creative) storytelling. People were drawn to David like a magnet, he lit up the room, and many called him their “best buddy.” He was the source for some of the happiest and fun memories for many family members and friends. David enjoyed life, often telling others, “Ain’t it great?!”

The family would like to extend a special ‘thank you’ to the staff at The Center at Rock Creek in Fort Collins, Colorado and Compassus Hospice in Denver, Colorado for the care given to David and compassion shown to family members during David’s final weeks. Family members are also grateful to Dr. Matthew and her caring staff at UCHealth Cancer Center in Fort Collins, Colorado for their guidance and support during these difficult days.

Memorials may be made to the Larimer Humane Society of Loveland, Colorado at www.larimerhumane.org.

Due to COVID, there will be no public memorial service at this time. Condolences may be expressed to the family online at www.marksfuneralservice.com.
To order memorial trees or send flowers to the family in memory of David Ardell Fischer, please visit our flower store.