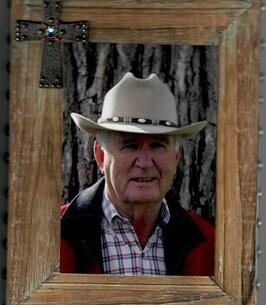 Dallas Horton, 81, well known cattle feeder and veterinarian, passed away at his home on September 29, 2020 after a year-long battle with cancer. Dallas was born December 20, 1938 in Sheridan, WY to Dallas and Wilma (Solberg) Horton and spent his early years on ranches in the Broadus, Montana area where he learned to tend to cattle and sheep while still in grade school. He attended schools in Broadus from elementary through high school. After rough necking in the oil field during the winter of 1957 Dallas enlisted in the Army. Being resourceful, Dallas won enough money playing cards to pay for flying lessons while stationed in Oklahoma – he held the longtime ambition from watching his Uncle Bud Horton drop supplies to Dallas’s family in the winter of 1949.
On leave from the Army, Dallas discovered his passion in life – veterinary medicine, while attending a local rancher’s meeting with his father. After the Army, he attended Montana State University and earned his DVM from the Veterinary School at Washington State University. After graduation, Dallas and his first wife, Shirley, headed to Canada where their son, Troy, was born. In 1966 Dallas was given an internship at Colorado State University and the family moved to Colorado. It was this move that shaped the balance of his career. After 7 years at CSU working in the Vet School, teaching courses, earning a Master’s Degree in Animal Nutrition and the birth of two more sons, Trent and Travis, Dallas launched his dream of his own business of feeding cattle, veterinary consulting for the cattle industry, researching feed additives and medicines for cattle, and improving the overall performance of cattle production through nutrition and genetic improvement. Thus, Horton Feedlots and Research Center was established in Wellington, CO in 1978. From there Dallas expanded the Horton feeding operation to the Greeley area. Trent and Travis still operate the feedlots today.
Dallas’s love of the cattle industry and people led him into many amazing partnerships and adventures from feeding cattle for Japan, sending breeding stock to the Ukraine, working with embryo transfer techniques to improve genetics, to building profitable composite bulls to enhance feedlot performance - just to name a few. Dallas’s vision was always toward the future and improving the cattle industry.
Dallas married Mary Shaffer on May 22, 1993 and they enjoyed 27 years of love, life, and adventure together until his passing. He was preceded in death by his parents and leaves his loving wife, Mary, his three sons, Troy, Trent (Kristin) & Travis (Kim), stepson John Shaffer, 5 Grandchildren, Dustin, Blake, Bryn, Nathan & Nicholas, along with his sister, Rosanna Horton and his Aunt Kathryn McCandless of Richland, WA.
A memorial service will be Monday, October 12th, 2020, 3pm, at Rick Montera’s Roping Barn. 34059 CR 33, Greeley, Colorado.
In lieu of flowers, contributions may be made to Pathways Hospice in care of Mark’s Funeral Home.
To order memorial trees or send flowers to the family in memory of Dallas Horton, please visit our flower store.