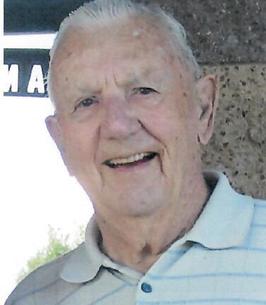 Carol Guy “Pete” Blansit, 97, entered into the presence of his Lord and Savior on March 7, 2021 at Medical Center of the Rockies in Loveland, Colorado, with his loving wife Ruth by his side.

He was born on February 2, 1924, to Clem Clay and Mary Louise (Key) Blansit in Hamilton, Texas.

After graduating from Hamilton High School, he was called to serve in the United States Army. Pete served during WWII in the European theater under the command of General George Patton landing at Omaha Beach a few weeks after the D-Day Invasion. He served as a Tech 5, with Battery A 468th anti-aircraft artillery unit. He had several special assignments as a radio operator 3601, driver, and mechanic. He served at the Battle of the Bulge and often remarked that his time serving in WWII was one of the most impactful experiences of his life. He received the American Theater Campaign Medal; E.A.M.E. campaign medal with five bronze stars; Good Conduct Medal and the World War II Victory Medal. He was truly a part of the Greatest Generation and was honorably discharged from service on December 5, 1945.

Pete had many gifts and talents. He served in the US Civil Service at Fort Hood, Texas for 30 years, first as a paint and body man and then as a machinist. He was a foreman at the machine shop when he retired. His many hobbies included being a leather worker, gunsmith, and a wood carver. Pete always strived for perfection in everything he did.

Pete is preceded in death by his parents, his first wife Norma Lee, his youngest son Steve, his brother John, and brother-in-law John Fox.

Peter was a member of Hope Baptist Church in Loveland, Colorado. The most important thing he would want you to know is his love for his Lord and Savior Jesus Christ. His long and blessed life was a gift from God. He will be missed so much, but we rejoice in the knowledge that he is finally home.

In lieu of flowers, memorial contributions may be made to:

Funeral services will be held at 10 a.m., Saturday, March 20, at Gabriels Funeral Chapel, 393 North I-35, Georgetown, Texas, with the Pastor Edward Barclay officiating. Interment will follow at the Florence Cemetery in Florence, Texas.

A Celebration of Life memorial service will be held in Colorado at 10:30 a.m., Saturday, March 27, at Hope Baptist Church in Loveland with the Pastor Dan Outler officiating.

Online condolences may be made at www.marksfuneralservice.com.
To order memorial trees or send flowers to the family in memory of Pete Blansit, please visit our flower store.

A Colorado service will be held at 10:30 a.m., Saturday, March 27 at Hope Baptist Church in Loveland, Colorado.