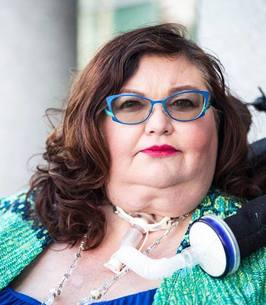 The disability community lost one of its fiercest advocates on 2/24/19. Carrie Ann Lucas, a disability rights attorney who pioneered representation for parents with disabilities, died after an arbitrary denial from an insurance company caused a plethora of health problems, exacerbating her disabilities and eventually leading to her premature death. She was 47 years old.

Carrie Ann Lucas is known around the state and the country for her strong advocacy.

Carrie Ann grew up in Windsor, Colorado and had several careers including being a teacher, ordained minister and legal assistant before becoming an attorney. Carrie graduated from Whitworth College in 1994, traveled and taught in Saipan, and then returned to the states to attend the Iliff School of Theology. She received a Master's of Divinity with Justice and Peace Concentration from Iliff in 1999, but during her time there, became increasingly involved in disability advocacy. After she graduated, she started working as an advocate and later legal assistant for the Colorado Cross-Disability Coalition, investigating, preparing, and monitoring disability rights cases and providing informal advocacy on a wide range of topics. While there, she was granted a full scholarship as a Chancellor’s Scholar at the University of Denver School of Law.

Following her graduation from law school in 2005, she was awarded a prestigious Equal Justice Works fellowship to create a program to combat discrimination that impacts parenting for parents with disabilities. This program, initially started within the Colorado Cross-Disability Coalition, spun off to be Disabled Parents Rights, one of the only organizations in the country devoted to this issue. She also became a national expert and trainer on the rights of parents with disabilities and, through her legal advocacy, secured decisions upholding and promoting those rights here in Colorado. Most recently she was recruited by the Colorado Office of Respondent Parents Counsel to help set up a program to train other lawyers around the state to replicate the sort of impact she was making.

In addition to these professional activities, Ms. Lucas was an advocate with the disability rights groups ADAPT and Not Dead Yet, speaking, teaching, writing, testifying, and protesting on disability justice and the rights of people with disabilities to healthcare and respect. She was also a talented photographer and cook. Carrie Ann was an activist at heart. She graduated from EMERGE, ran for Windsor City Council in 2017, and was planning on additional political activity. She was chair of Colorado Democrats with Disabilities for the past several years. She was a member of the ADAPT group that protested in Cory Gardner’s office and got arrested to help save the Affordable Care Act in 2017, particularly Medicaid. She served on the Board of Directors of the American Civil Liberties Union of Colorado. She was active with Not Dead Yet and fought hard against physician assisted suicide and the notion that life with a disability is not worth living. She demonstrated every day how amazing life with a disability can be. She was given the Intersectionality Award from The Civil Rights Education and Enforcement Center in 2016. She was a leader in passing HB 18-1104 which changed Colorado law to make sure that disability was no longer a reason to remove a child from a parental home. There is much, much more.

Carrie adopted three more children over the years, Adrianne Lucas, Azisa Lucas and Anthony Lucas. All of her accomplishments centered on her dedication to her children and her role as a mother. All of her children have significant disabilities and Carrie Ann always made sure that they were not only educated and included in their communities, but that they were loved, respected, and supported in their individual hopes and dreams.

Carrie had a severe neuromuscular disease, a rare form of muscular dystrophy. She relied on a power wheelchair, and had used a ventilator for years. However, her death was premature and caused by inappropriate and brutal cost containment procedures of an insurance company. Because Carrie Ann worked for the state, she had use state insurance which was primary ahead of her Medicare and Medicaid. In January of 2018 she got a cold which turned into a trach and lung infection. Her insurance company UnitedHealthcare, refused to pay for the one specific inhaled antibiotic that she really needed. She had to take a less effective drug and had a bad reaction to that drug. This created a cascade of problems, loss of function (including her speech). United Healthcare’s attempt to save $2,000 cost over $1 million in health care costs over the past year. This includes numerous hospitalizations, always involving the Intensive Care Unit which is par for the course for ventilator users.

Carrie Ann had hoped to spend a lot of time in 2019 using her tragedy to work to fix our broken health care system. Her blog www.disabilitypride.com provides more details. For all intents and purposes a shero of our community was murdered in the name of cost containment. This is why we MUST fight these measures with all we have. Insurance companies and government programs must not be allowed to deny people what they need. Just last month she was having to ration her insulin for her type 1 diabetes because of the same insurance company and how impossible it is to work between private insurance and Medicare and Medicaid. This is a great example of why people with disabilities should not be forced into insurance or health plans and why we need Medicaid as the primary health delivery system for this country.

In addition to her four children, Heather, Adrienne, Asiza, and Anthony Lucas, Carrie Ann is survived by her parents, Phil and Lee Lucas, of Windsor, CO; her aunt, Emily Rupert, of Windsor, Colorado; her brother, Eric Gover, of Mt. Dora, FL; her sister, Courtney Lucas, of Loveland, CO; a niece, Danielle Mann (Aaron Boone), of Dallas, TX; her nephews, Cody Mann, Richardson, TX; Gavin Lucas (Kathleen), of Loveland, CO; and Colin Lucas, of Ft. Collins, CO; and numerous great-nieces and great-nephews. She is predeceased by her grandparents and her sister, Kelli Mann. She is also survived by her partner, Dr. Kimberley Jackson, a CCDC Board member and activist in the disability community. She will also be missed by a wide circle of friends and colleagues throughout the country.

Memorial donations may be made CCDC/Coloradogives.org in care of the Carrie Lucas Fund.

To order memorial trees or send flowers to the family in memory of Carrie A. Lucas, please visit our flower store.

The Lucas family ask that everyone is to wear bright colors to the service. The family also asks that in lieu of flowers, that people keep up the fight for equality that Carrie was so passionate about.