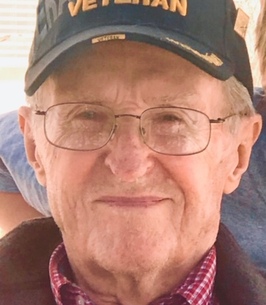 Billie Joe Barton, age 94, passed peacefully into the waiting arms of Jesus, Friday June 19, at Denver Hospice. His beloved 6 daughters, other treasured family members and his precious dog Gidget were by his side.

He was born at home March 9, 1926 in Forth Worth Texas to Lucell Gertrue Sandlin and Joe Bailey Barton.

He graduated from Polytechnic High School in Fort Worth, class of 1943.

He enlisted in the US Navy at the age of 17. He was a photographer’s mate second class. He served on the Aircraft Carrier USS Essex from 1943 to 1945. He participated in carrier raids on the Philippines, Okinawa, Iwo Jima and Japan. He was the first American to fly over the Imperial Palace in Japan near the end of the war.

While at home for Christmas, his mother introduced him to a girl named Wanda who worked for her at the Morris Store in Dallas. They got engaged after knowing each other only a week. They were married on a Friday evening, Sept 12, 1947 and were married for 72 wonderful years.

Dad had taken a picture of a pretty girl on the bus sometime before they met. Looking through pictures one day together, they discovered it was Mom.

Going to school on the GI Bill, he graduated from Southern Methodist University in Dallas with a degree in Mechanical Engineering. He worked for several several high-tech companies including Texas Instruments, Martin Marietta and Hewlett-Packard. He worked on some interesting projects including the nations first spy satellite, a radar repeater in the 1950s to make the Russians believe they were looking at 20 bombers instead of one, and helping HP manufacture it’s first diode. He was co-founder and co-owner of Video AIDS Corporation with Walt Skowron, a friend and fellow HP engineer in Loveland, CO. He retired from HP in 1992 after 30 years with the company.

He loved coming to Colorado as a young boy with his mom to visit his Grandaddy Sandlin, and decided he wanted to live here someday. So, he moved his young family to Colorado in 1956. He loved skiing, both in our beautiful mountains and on the water at Horsetooth Reservoir. He also loved fly fishing, tying flies and star gazing with his telescope. He loved Christmas with the family, and the traditional Christmas Eve buffet at their home was something everyone looked forward to. We also enjoyed family camping trips.
He was excited be able to take
The Northern Colorado Honor Flight for WWII Veterans to Washington
DC in May 2011.

He was preceded in death by his parents Lucell and Joe Barton.

Full military honors will be scheduled at a later date, along with a Celebration of Life, to be held at their mountain home in Estes Park, CO.

In lieu of flowers, donations may be made to Denver Hospice, whose wonderful care made Dad’s last 3 days of life more comfortable, and helped ease his transition to Eternal Life!

Online condolences may be made at www.marksfuneralservice.com.
To order memorial trees or send flowers to the family in memory of Billie Joe Barton, please visit our flower store.

Private Family burial will be held.