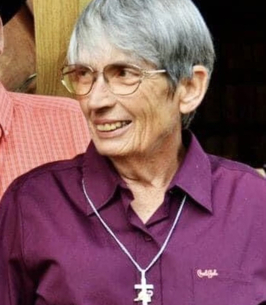 Barbara Diana Haas joined our Lord in Heaven October 4th, 2021, at the age of 82, with the comfort of her family. Barb was born June 30th, 1939, to Clarence and Mary Weichel. Barb was raised on the family dairy farm with her three brothers, Dennis, Paul, and Bill Weichel and cousin, Harvey Johnson. Growing up on the farm, started a lifelong (and arguably hereditary) loved for all animals, particularly horses. Barb’s barn was always full of horses, her most recent favorite being a sorrel mare named “Sugar,” as well as her beloved barn cat “Bobby,” and her sweet Corgi “Josie.”

Barb married Harland Haas on January 30th, 1961, in Windsor, Colorado. From this union came two Sons, Ken and Kurtis. Barb and Harley planted the roots of their family as well as the roots of sugar beets, corn, and hay outside of Windsor. Their farm was also home to Appaloosa and Quarter Horses, and later, Ken and Kurt would also start their families there.

Barb retired after 32 years at HP in research and development. After retirement, she took great joy in helping around the farm and helping care for her five grandchildren. Grandma Barb was involved in many summers of 4-H projects, county fairs and rodeos with the grandkids.
Barb’s love for the outdoors kept her going. In addition to horse’s, she enjoyed camping, fishing, hunting, and just being outside in general. Morning chores in the barn was always anticipated. Spending time with her family was most important. It didn’t matter if it was in-person or on the phone with daily routine calls to each of her sons.

Barb was preceded in death by her parents, one infant sister, and cousin, Harvey Johnson.
A celebration of life service will be held Thursday, October 14th from 11:00am-2:00pm at the Windsong Estate Events Center.

In lieu of flowers, the family asks that donations be made to St. Jude Children’s Hospital.

To order memorial trees or send flowers to the family in memory of Barbara Diana Haas, please visit our flower store.